Fall Fishing and roosters on the river.

Fall on the river in Georgia is the most beautiful time of the year to be fishing in my opinion and can also be one of the most productive times to fish. As the water starts to cool down the fish sense that it is time to start preparing for winter and fattening up. You don't catch as many  but when you do its usually a quality fish.
Fall is a great time to be fishing large baits and is also the best time to fish top water type lures. The big bass are out in search of a large fulfilling meal that is really going to fill them up without expending a whole lot of energy to get it. The weather conditions can be a bit challenging in the fall but if you really want a chance at a trophy fish or a shot at the record you should take advantage of any opportunity you can to get on the river. It will not be long until winter is here and that opportunity will not present itself again until spring.

River fisherman like most fisherman are always looking for a sign they are going to have a good day and this was exactly the case on my latest outing. First sign of the day was realizing I had left my paddle and two cameras in my truck at the take out after we had done the shuttle and having to go all the way back to get them. This seemed like a bad sign at the time. The next sign we encountered was three roosters that greeted us at the beginning of the trail where we were suppose to enter the river. It appeared almost like they were blocking the trail trying to stop us from fishing.. Turns out both of these events would be good signs at the end of the day. 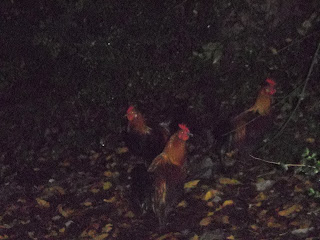 After we made it past the rooster guards and launched our boats it would not be long before there would be another sign that we were in for a good day on the river. Within just a few minutes of getting started I had cast a buzz bait into a large deep pool and was greeted with a massive top water explosion. This fish smashed my bait like she had not eaten in a week. I immediately knew I had a good fish on. My scales would not register so no weight was taken but the fish measured 19 1/2 " and we estimated her to weigh some where in the 4 lb range. As you can see this fish was fat and very healthy. A good sign that the fall bite is on and the fish are feeding heavily. 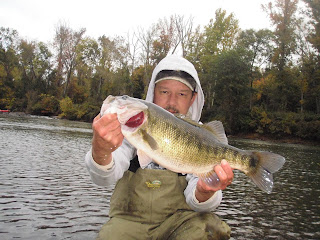 As you can see in the picture I am dressed for cold weather. The wind was brutal gusting up to 20 mph so as you can imagine it made it tough to fish but we made the best of it. We were moving so fast that all we could do was fish fast moving re action baits and buzz baits turned out to be the ticket for the entire trip. A few minutes after I caught my first fish one of my partners Glenn hooked into this nice 6 1/2 lb largemouth and before they day was out he had caught another one over 5 lbs and several other good fish. Glenn had dialed in on the largemouths holding on wood cover and ended up catching quite a few good fish. Two over 5 lbs in one day is nothing to sneeze at. Here is Glenn's big fish of the day. 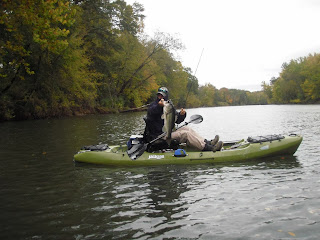 I did not catch any more big ones on this day but did manage to catch quite a few fish but that one big girl made the trip all worth while. You never know when that fish of a life time is going to show up but the fall of the year. is a good time to be out there trying. Our other partner Sean rounded out the day with his big fish of the day very near the take out point. This fish also nailed a buzz bait. 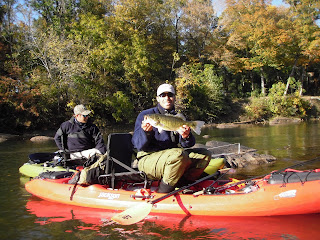 The fall of the year is truly a special time to be on the river in Georgia. With the changing leaves and crisp autumn air it can be very relaxing and rewarding time to get out and enjoy the great outdoors. On the weekend prior to this one I had made a trip by myself and did a short paddle up and also had a productive day. Here are a couple of fish that I caught that day. 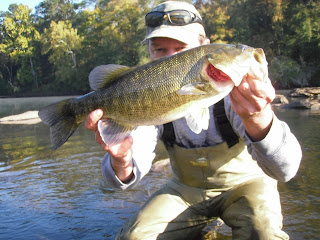 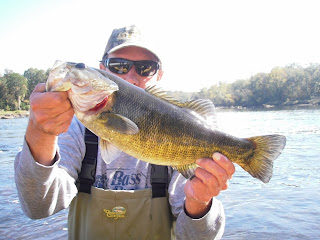 So the quest continues.Don't miss out on some great fall fishing my river fishing friends and watch for those signs. Its a great time to be out there and you just never know when you might catch that fish of a life time or who knows maybe even a world record. Good luck out there and be safe folks.Until next time.. FISH ON !!
WJ
Posted by Unknown at 2:13 PM