Below is the is the post I made on Riverbassin.com the night I returned from one of the best trips I had been on in quite some time.I was so excited to finally have a good day on the water that I just had to get some pictures up for everyone to see.My week of vacation that I took primarily to fish for the record had been uneventful up until friday 04/08 so you can imagine how excited I was to finally get into some big fish.

Even though the river was still to high to fish I had to go give it a try anyway as my vacation time was quickly running out.

I took a entire week off of work this week in order to get in on some spring time shoal bass action.
With all the recent rains and high and muddy river contions all over the state I have only been able to get out on the river twice since last saturday.Even though we knew the river would still be high again today we took a stab at it but at least this time we found some clear water.Today was just one of those days
when you just happen to be in the right place at the right time under the right conditions with the river gods on your side.

Today I caught my personal best shoal bass and my second best shoal bass and a few other nice bass to boot.Swim baits worms and finesse jigs seem to be the pay off baits.I broke a rod got hung up in the trees
run most of the line off of one of my reels lost a few baits as my gift to the gods but they rewarded me for my losses.Please excuse the the poor picture quality and multiple pics of the same fish..I forgot that my flash was off and took some dark pics but I tried to lighten them up a bit. 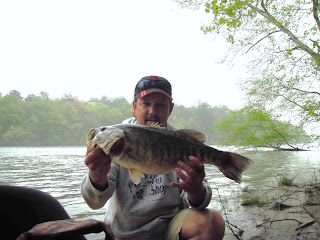 Another shot of the same fish..Sweet huh ? 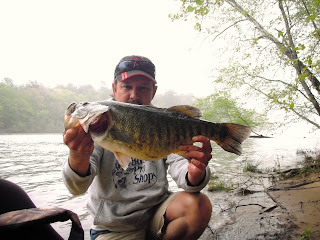 Nice 3 something shoal bass...Did not weigh this one.
I would have been happy to call it a day at this point. 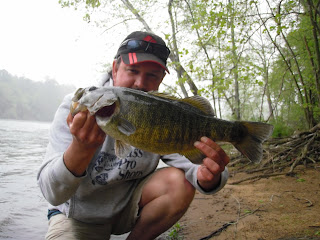 But then just a few minutes later I caught this fish out of the same spot..Holy cow I could not believe what was happening..I just caught this big girl.
My second best shoal bass..4-15 nailed a finesse jig..two pics. 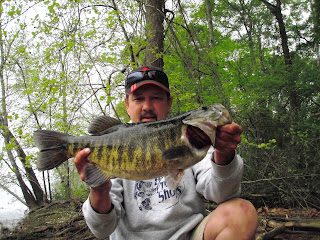 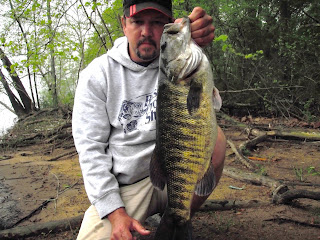 This was incredible..Not only had I caught my personal best Shoal bass over 5 lbs but I had also
caught my second best Shoal bass in a matter of minutes apart and another nice fish to boot..I could have left and went home a happy man and not made another cast but no.. I still had one more kicker fish to come.
We had headed down stream after a while of fishing the same hole and getting no more bites when I hooked into this one very near the boat ramp where we had put in..

A 5-5 Large mouth...This girl was spawned out..Long skinny with a big head.She may have went over
six prespawn.. 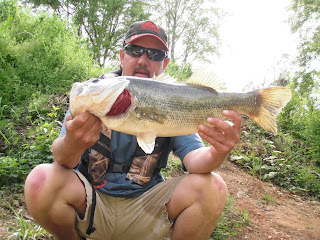 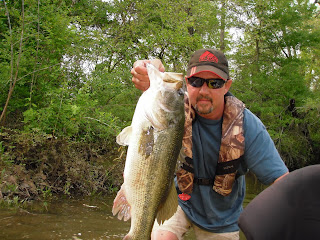 In addition to that I had caught this largemouth a few minutes earlier..
No weight on this one but no dought a nice fish. 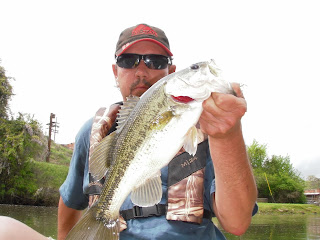 After several trips previous to this one that were far less productive and a few where I did not catch anything at all you have to know that this was a major confidence booster..Breaking two personal records in one day just minutes apart was incredible and put me up on cloud nine..But I soon realized that although I had caught some really nice fish that I had come no where near my goal of catching the world record.. I would need to catch a shoal bass that was more than 3 lbs heavier than the biggest fish I caught on this day..That is a huge leap...I cant even imagine what it would be like to fight a shoal bass of that size but I sure would like to know.

So my quest to catch the world record shoal bass continues although for one day I did have a few minutes of glory I still have along way to go.
Who knows..The very next cast I make may be the one that catches the record.

Stay safe out there folks and fish hard.
WJ