Yes..That's right..I said pretrip report...I am sitting here brain storming on how I will handle some really tough fishing conditions tomorrow..Some of my fishing buddies hit the river today while I was at work since they all had Good Friday off. All are reporting that they had a pretty bad day due to the fact that the water was really low and super clear.I will be hitting the same water in the morning with my fishing buddy Bruiser..I have no choice but to go since I only have Saturday to fish this week because of Easter and its prime shoalie time so I have to go give it a shot..So what do you do when the water is super low and super clear and the fish seem to be  in the lock down I'm not biting kind of mood ? Well I have a theory and tomorrow I am putting it to the test.

This theory includes the following..A stealthy approach..Finesse type baits.As natural as possible looking baits and as much patients as I can possibly muster.
I will up date this report tomorrow night on my return and let you know how I do.Even though the river has dropped dramatically and conditions have changed I know the fish are still there and they have to eat some time.I am going to see if I can figure out how to get them to bite tomorrow..
Stay tuned.

The Results
I think I broke the record today..The record for the most times falling down in the river in one day that is. It was a major struggle to get up stream to the shoals with the low water conditions..The rocks were very exposed and very slick..Seemed lick every time i turned around I was taking another spill and by the time I finally reached me destination I was soaked from head to toe. On top of that it was fairly cool this morning with a lot of cloud cover and a mist in the air which made it very uncomfortable..I was cold to the bone for most of the morning to the point of shaking until around noon when the clouds finally broke and the sun came out..

The fishing tactics that I had planned to use in the low water conditions did not seem to pay off in the way they I had hoped.I threw worms, jigs swim baits and even tried a little top water action but could never really get into a groove or pattern that worked..I tried my best to stay in a stealth mode to keep from spooking the fish but that was tough with the slick rocks and my inability to stay on my feet.I did manage to catch a few fish  but most were small..My fishing partner Bruiser seemed to have his game on though catching three fish over four lbs early in the shoals..Not sure what he was doing different than I was but he had them dialed in for a little while.

Most of the fish I caught were around this size. 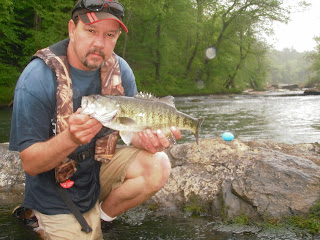 I managed to catch a total of maybe 10 fish for the day mostly on a green pumpkin Zoom Finesse worm and a couple on top water on a Hedon Torpedo..Once the sun finally came out and warmed things up including myself the bite pretty much died off for the rest of the day for me.

This was my best fish..Don't let the picture fool you..This fish only weighed around 3 lbs or so..I used the old fisherman's picture technique to make it look bigger than it really is.. 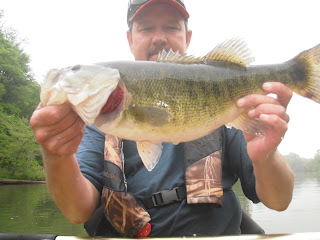 The shoal bass is a tough fish to figure out..When will they spawn ? Where will they be? In the shoals ? In the slack water ? The river conditions are constantly changing and are influenced not only by the weather but you also have the dam up stream effecting the river levels..This make it very difficult to to figure out when to and where to go..So do I allow myself to be discouraged by this one bad day of fishing ?
I think not.
Two weeks ago I had one of the best days ever and last weekend was not so bad either so I cant let this one bad day discourage me from my quest.

I will be back out there next week I am sure trying to figure out this fish...Looking for that big one.
The World Record Shoal bass !!

Fish on my friends and have a Happy Easter !!
WJ
Posted by Unknown at 9:57 PM