I am hitting the river in the morning no matter what the conditions might be.Right now it is raining cats and dogs here at the house in Mcdonough but I don't think all the water will actually make it into the river system for 24 hrs or so..May stain it up a bit but that can be a good thing.I am going to visit an old friend that I have not fished in a while and if history holds true the big shoal bass should be up in the shoals.

I have been thinking about this all day planning where I will go and what pockets that I plan to fish..I am so freakin excited I know I will not be able to sleep tonight.Tomorrow could be the day..The day that the big girl shows up or at least a six or seven pounder could be caught..Who knows but I can tell you this ..I am going to fish it like i am fishing for the world record..Just like I have done every time I have been on the river this season..Maybe tomorrow night I will post the report of a life time maybe not but I can assure you that tomorrow come hell or high water that I will be out there fishing for the world record shoal bass.

Well this trip turned out to be a good one over all but the big girl that I am looking for did not show up this time.I met up with my partners for the Glenn (RatherBfishing) Anderson and Sean (Bruiser) Brodie at the river around 07:00am.The dam operators decided to release I guess because of all the rain we had received the night before so the river was up and running at a pretty good clip. In addition to that we had planned to put in at our normal take out and paddle up to a set of shoals about a mile upstream that is known to be home to some big shoal bass this time of the year.

I have never paddled so hard in all of my kayak fishing days.It took every ounce of energy I had to even paddle enough to stay in the same spot let alone actually get up stream. There were several times when I just had to get out of the kayak and wade in water sometimes up to my chest to make any head way..It was absolutely exhausting but after a couple of hours I finally made it up to the shoals where I had planned to start fishing..RBF and Bruiser decided to take the high road and start at a spot farther up steam than I did.Once we split up I did not see those guys for several hours.

Once I got in the shoals it did not take long before I would hook into the biggest shoal bass that I would catch on this day.I got into position and made a couple of cast with a swim bait into a promising looking spot and on maybe the forth or fifth cast BLAMO...It was on ..A big shoalie smashed my swim bait and began a fight that would last two or three minutes in some really swift water..I was not sure if I would get this one in..She was using the high  swift water to her advantage and put up a hell of a fight but I finally got her in.
Here are the results..A nice 4 lb 11 oz shoal bass.It was a real struggle trying to take this picture in the swift water. 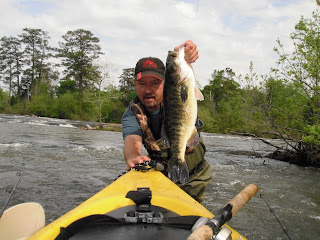 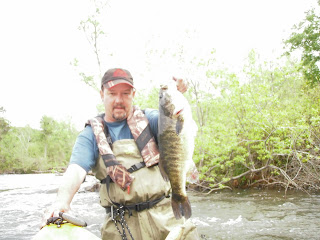 After catching that fish I thought to myself..Alright it is on now..Today just might be my day..Today might be the day that I catch that fish of a life time..I continued to fish may way upstream moving from pocket to pocket looking for deep holes in between the rock and shelves that might hold fish..Each time I would come to a likely spot I would catch a small fish or two out of each one but nothing bigger than 2 lbs or so but by the time I had reached the top I had caught over 15 decent fish..Needless to say I was having fun.

Later in the day I finally met back up with RBF and Bruiser and they reported that they had caught a few with RBF landing the biggest with a 3 lb 3 oz spotted bass.We continued on fishing together for the rest of the day but the bite had seemed to slow down a bit..The fish were just not as active as they had been earlier in the day...I did manage to catch another nice shoal bass and a decent spotted bass before we were done. 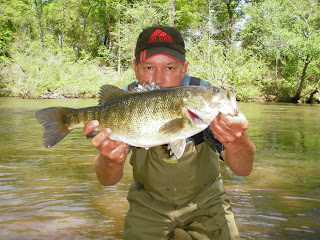 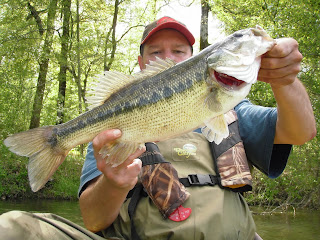 I think I ended up catching a couple of more small fish before making it back to that take out but that was pretty much the end of my day..Not to bad over all..Total fish caught was some where around 20 to 25 with that 4-11 being the biggest..I'll take a day like that anytime.

One more thing I would like to mention that happened to me on this trip..Early that morning after I had split up from RBF and Bruiser I had a bad experience that reminded me that I should not have strayed away from the company of my partners.I had come to a narrow section of river where the current was very swift and there was a small water fall that I needed to get over..There was no way to go around and my only choice was to climb the middle which was a three to four foot drop.As I was climbing the fall and dragging my kayak behind me the water formed a suction and pulled my kayak in under the fall and swamped my boat.It immediately flipped the boat and dumped every thing in it including my tackle box.

I was quickly able to flip the boat back over and grab my rods but I looked up and saw my tackle box headed down stream fast. My tackle box not only had all of my tackle in it but I had also stowed my wallet and truck keys in a side pocket. I immediately jumped in the kayak and and started paddling after it..I had to get to it as soon as possible because there was a fallen tree that was across the river about 45 yards down stream..My heart was racing and I was scared to death..Well I caught it just in the nick of time but then had to stop my self before hitting the tree in my kayak which could have turned deadly.

After this ordeal was over I stood there in the middle of the river holding on to my kayak and tackle box shaking uncontrollably until I regained my composure.It was at that moment that I realized that I had done something that no one should ever do when kayaking or any other out door sport like it..
NEVER GO ALONE..If something would have happened to me there would have been no one around to help me and Bruiser and RBF would have never known that  I was in trouble.In addition to that I did not have my gear properly stored or I would not have found myself in that position in the first place.

So there you go folks..No fish in the world is worth risking your life over not even the world record.
I almost started to say that I learned my lesson on that one but that is a lesson that I should already know.
Fish on my fellow riverbassers..Stay safe out there and go catch a big one.
WJ
Posted by Unknown at 10:24 PM