A few months ago I had made a post on face book and changed my profile picture to one of when I was a child and the post was about a couple of very special friends that I grew up with that have both passed on and a hat that was made for me by one of their mothers that I have held on to for all of the years. Below is the post and picture I made one Face book. 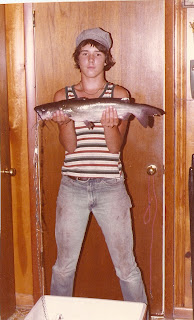 Jon Freeman This photo was taken around 1978/79.The rail road hat I am wearing was hand made by Mark Watkins mother.She made one for me Mark and James Blackburn. James and Mark are are gone. I still have my hat. Soon after this photo I grew a beard and have only been seen without one once.
I miss Mark and James and will never forget the hours days that we spent together as kids roaming the woods  and creeks and lakes fishing and camping together but this past weekend I was reminded that  life goes on and as we loose special friends and family  in our lives we continue on . We make new friends and we build new relationships and kayaking and river fishing has allowed me to meet and become friends with some of the most incredible people that I have ever known.
After several weeks of being in such a deep state of depression due to some recent events in my life  I finally decided it was time to shake the funk and get back on the river. I was joined by my good friends some of which drove several hundred miles to join me. Danny Bell , John Robins, and my new friend David Williams came in from South Carolina and of course my good Buddies Glenn Anderson and Sean Brodie were there to join us for my first river trip in almost four months. We had a total blast and I started the day off with a laugh for everyone by falling in the river at 08:00am. The water was chilly but luckily I dried off quickly and it did not ruin my day.
The weather was great and we all had a blast . No big fish were caught but everyone caught a few and the comradery was incredible. After the trip we all joined at my house for a steak cook out and a few cold ones and of course a bunch of great fishing stories were told. It was a big time had by all and I felt absolutely like a new man. Like a weight had been lifted off my shoulders. It was great feeling to have such an incredible group of guys to go out of there way to come down and join me on my first trip back on the river..
The next morning we all got up and  had a few cups of coffee and and talked over our trip the day before and some future trips to come. As each one of those guys loaded up and got ready for their trip home every single one of them hugged me and told me that if I ever needed anything to call them no matter what.  I watched each one drive off and thought to myself. Life is good and it will only get better. How could go I wrong when I have a bunch of buddies that care about me that much to go that far out of their way to get me back on the river. I gotta be thinking that Mark and James are up there looking down cheering me on too.
Oh yea... I still have my hat. 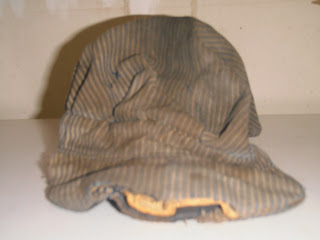 Fish on my river fishing friends fish on.
WJ
Posted by Unknown at 9:17 PM