Remembering the good days and the bad. 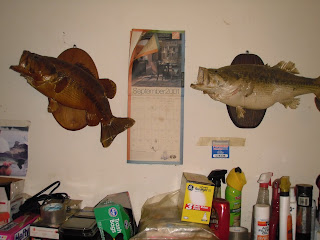 In the image above there are a couple of interesting things that brings back some memories for me that are good and some that are bad. In this photo you will notice there is a calender that is still on the month of Sept 2001 and it hangs in my garage as it as since that faithful day that is now almost 10 years past. It has remained unchanged and now covered with dust and cob webs since that day. There are also two mounted bass on either side that were caught back when I was around 9 to 10 years old. Hate to tell my age but that's about 35 to 36 years ago. They are looking a little tattered these days from being moved around a lot but they bring back some very special memories of my childhood.

As a child I was very fortunate to have a family that enjoyed the outdoors and loved to fish hunt and camp and all sorts of outdoor activities. I spent many days roaming the country side with my grand father fishing farm pond all over Henry county Georgia. You see my grand father was a welder by trade and had many farm customers that needed his services on their farm equipment and most of those same farmers had ponds on their property. My grandfather would make deals with with these people and do a little welding on the side for access to these ponds so you can imagine we got to fish in some great private lakes that rarely were fished by anyone other than us.

These two fish were the only two that I ever had mounted so don't worry I stopped taking fish a long time ago and even back then we only kept what we needed for dinner and released the rest. Heck.Now days I don't have the heart to even keep a couple to eat..They are all released unharmed. These two fish really bring back some fond memories of days spent with my grandfather and brother bass fishing.
My dad was more of a trout fisherman and hunter so he and I spent many days on trout streams in north Georgia or hunting for deer.

The calender also brings back some memories of a time that none of us should ever forget. Very soon it will be ten years to the day and I know exactly where I was and what I was doing at the moment it all went down. I have been in the air freight industry for over 20 years flying cargo on commercial aircraft every day. Not many people know that when you get on a jet to go see grand mother in another state there is more than likely a whole lot more than baggage up under your seat. This is what I do so you can imagine that my professional world was turned upside down on that day but more importantly than that thousands of people lost their lives and freedom to enjoy this beautiful world and make memories like we all we do everyday.

So there they hang day after day the old fish and the old calender collecting dust and spider webs. It wasn't meant to be a memorial of of any sort but it it just kind of turned out that way.The calender is like a old clock that just stopped ticking and the fish were just to tattered to hang in the house any more. Every now in then I just stop and look and they bring back memories of some good days and some bad. So we keep on going out there and hope that that the good memories out weigh the bad I guess.

Keep on keeping on my river fishing friends.That's all we can do.
I want to leave you with a good one though.
The pic below is of my good friend Glenn Anderson's son Evan just this past weekend..The smile says it all and that's what its all about right ?
WJ 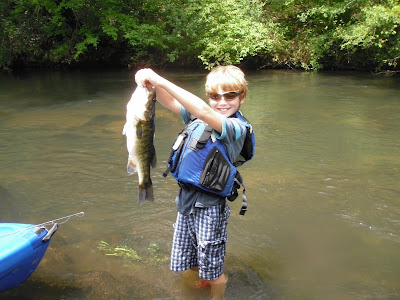