Not really an attempt at the record but more like a desperate attempt to shake off the cabin fever
and get back on the river after several weeks of non fishing and being house bound during the cold of winter. Now you would have thought that we would have picked a day when it was some what warmer
to do this but no way..Me and my fishing partner Glenn (RatherBfishing) Anderson picked the first available day we could go which just happened to be the worst day of the weekend.

The low temp that morning was in the 20's and the high for the day might have hit 40 and the wind howling like it was it might as well have stayed in the 20's..To top that the dam up stream was releasing water when we arrived and we had to paddle and wade upstream for approx a mile against some strong current and climb one hefty set of shoals to reach our honey hole..Remember now...Patients prevail right ?

After about an hour long struggle in fridged temps and water we finally reached our fishing destination
just in time for the winds to pick up and start blowing us around the river and making it nearly impossible to fish. If you made a cast into a good looking spot by the time you reeled in you would be blown up stream or spun around in another direction..After all we went through to get there it was becoming very frustrating trying to fish and control our kayaks in the strong current and wind.
But I was not going to let the conditions stop me from catching at least one fish..All I needed was one fish to get the 2011 skunk off so I just kept trying..

After a few hours of fishless frustration and a fridged shore lunch that was so cold it had no taste we got back on the water for another attempt before we headed back down stream.I kept looking for a break from the wind or some trees to block it but the wind kept coming from all directions..I finally rounded a  bend while hugging the tree line and all of the sudden I found myself in the perfect spot with no wind what so ever..It was abosutley still and right in front of me was some perfect deep water just outside of the main current.I wasted no time in taking advantage of the opportunity because I knew it would not last long..

Considering the time of year and the cold water conditions, I knew that the fish would not be very active and that it would take a slow presentation with a bottom bumping type bait like a plastic worm or craw type lure.I had tyed on a finesse jig with a plastic craw trailer on to one of my rods and that is the one I chose.
On the very first cast I allowed the bait to sink to the bottom and sit for a few seconds and then slow lifted my rod and moved it just slightly..That's when I felt that tell tale tick in my line..I waited for a moment and then applied a little bit of pressure until a felt a mushy sensation..I reeled down taking the slack out of my line and set the hook...Fish on !! Finally got one on...Sweet !!

Well the fish I guess was so cold it barely put up a fight and never broke the surface until I lifted it from the water and brought it into my kayak.To my surprise though it was a pretty darn good fish..No where near a record but I had removed the skunk and boated a nice 3 to 3/12 lb Shoal bass to start the 2011 season.
My patients had paid off and saved me from a fishless trip on a cold January day..It would have been great to catch a few more that day but after all that we had been through I was perfectly content to
just catch that one fish..We fished for a while longer without another bite and called it a day.
Here are a couple of pictures. 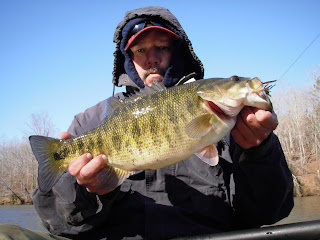 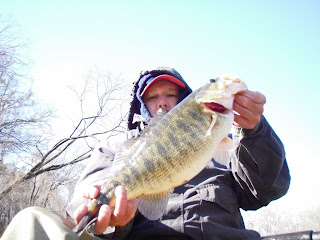 I have spent many days on the river in the spring and summer months during the best of fishing conditions only to wish I had caught just one good fish like that one..Can I take this as some kind of sign that the 2011 season will be my year ? Do I have a shot at catching the world record Shoal bass ? I dont know but I can assure you that I am going to give it my best shot and maybe just maybe..
My Patients will prevail..
WJ
Posted by Unknown at 10:46 PM