Below is a fishing report I made on riverbassin.com today.In addition to this trip report I would like to add
that I have made two other trips out this year since January and came up empty handed both times.
That makes today's catch even more important to me..Catching that one good fish today helped pull me out of a slump.No where near a record I know but it restored my confidence...

Me and RatherBfishing hit the river this morning at day break thinking we would have a banner day after
all the warm weather we have had for the past two weeks.We fished for 3 or 4 hours without a single bite throwing every thing in the tackle box at them..Finally RBF drew first blood with a decent 2 to 3 lb large mouth
on a white spinner bait..At that time the water had warmed up to 48 degrees from 47 when we started..
No picture taken on that one...Just a few minutes later I hooked into a nice shoal bass on a black finesse worm.We were thinking that maybe the bite was going to pick up..Here is a pic of that one. 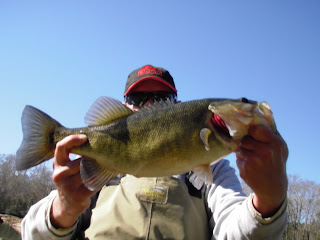 After that we fished for another 2 or 3 three hours without a single bite..Not even a smell.
At that point I had just about given up..If RBF had said lets go home I would not have argued but instead we continued to fish and actually paddled back up stream to our starting point to give it another try hoping the water had warmed up some more and the bite would turn on.
A few minutes later I here RBF holler out fish on and see him struggling with a big fish so I paddle over to assist and look at what he had . 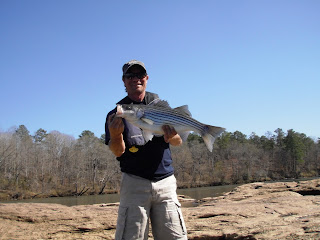 That was exciting and now we both had new found hope that we might salvage the day and catch a few fish after all...A few minute later I had spotted a submerged rock out in the middle of the river that looked promising..I had been using a finesse jig some but decided to tie on a heavier mop stlye gig
with a larger trailer thinking a bigger bait might be the ticket.I paddled out up stream of the rock and landed the bait on top of the rock..I pulled it slowly off the edge and as soon as it fell BLAMO !!
This girl nailed it on the fall...Did not get a weight because my scales were dead and I did not know it.
Two pics. 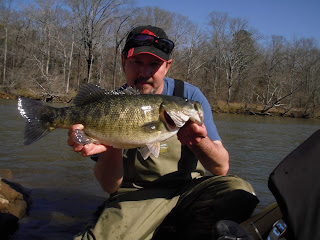 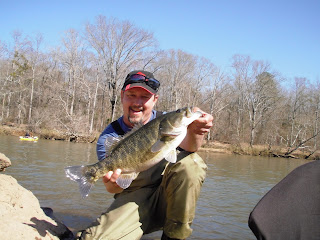 A little while later this large mouth hit the same mop jig and that ended my day.. 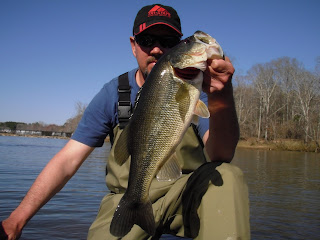 So not a bad day after all I guess.I only caught three fish but I have to keep reminding myself it is still winter..We still have a few weeks until spring arrives when the best shoal bass fishing gets started..Will I catch the world record shoal bass ? I dont know....Am I capable of catching the world record shoal bass ?
Damn right I am..
For now I am just going to keep on trying.
Until next time.
See you on the river !!
WJ