What happend to going from spring to summer ?

We are going backward ? The weather in GA has been really jacked up this spring.The lows this morning was in the 40's and only warmed up to the low 60's today..It has been super windy and cool for the past week with low cloud cover but no rain ? In fact it has been super dry and the rivers are very low and clear.To be so cool you would think there would be more moisture but it is almost draught conditions at my house.My grass is dying and has not needed to be cut in two weeks.

After all the mothers day activities and the big birthday party weekend before last I was all geared up to go catch some big spring shoal bass before the spring time spawn was over but it just did not happen..We went but the conditions were less than favorable.The water was low and super clear and a cold front moved in the day before that just screwed the fish up big time. We caught a few fish but mostly juvenile males in the 1 to 2 lb range..There were several times that I could see big mommas in that were easy 4 or 5 lbers swim by but they were not interested in any bait that I had to offer.

Shoal bass like all other black bass species are at their prime in the spring when the females fatten themselves up for the spawn..This is the time of year when you have the best chance at catching a record shoal bass..I think that I may have missed my chance at the record this spring.The fish that we did catch last weekend were either small males or spawned out females that were very skinny so that tells me that the spawn has already taken place or is in progress and about to end.I also noticed some big fish sitting on top of the rocks in open water acting like they were totally uninterested in any feeding activity.This tells me they are in that post spawn funk.

I may have missed my chance at that big fat spring time momma shoalie that I have been looking for but I did catch some really nice ones so no disappointment here..There is always the fall and next spring.
They will be back in that heavy feeding mode when the water starts to cool down in the fall getting fat for winter.Who knows...Might even hook up with a big one over the summer months.

I will be back at it soon..May even take a break and go after some small mouth up in the Carolina's soon.
Stay safe out there folks.
See you on the river.
WJ 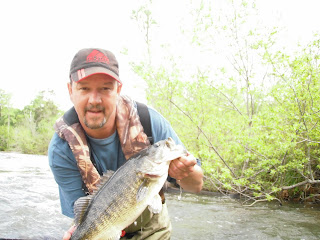