Well there has not been much to report lately as far as big fish go. Seems like since summer kicked in and things heated up the big shoal bass headed for deeper waters to hide out until things cool off. Over the past few weeks we have experienced drought conditions around the state and the rivers have been extremely low and super clear.

I believe the big shoal bass seek out deeper water with cooler temps where they can hide out during these times. In a couple of months though we will start to transition into the fall pattern and the fishing should improve. The fish will move back up into the shoals to feed and fatten them selves up in preparation for winter..This is when I will have my next opportunity at that record fish.

RatherBfishing likes his fruit prepackaged frozen in a bag. 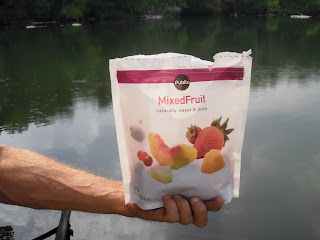 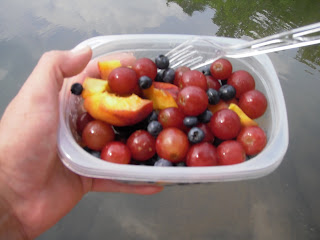 Nothing like some ice cold fruit on a hot summer day to refresh you and give you a energy boost.
And it was a hot one..It was in the mid 90's for about the 16th straight day I believe in the state of Georgia.
That did not keep up from getting out there though..

The morning started out slow but once we got into some shoals we found a pretty decent top water bite
that lasted until the sun cleared the tops of the trees around 11:00am..RBF scored on buzz baits and rag tail shads and
I caught a few on the ol trusty Torpedo..After the top water bite turned off it did not take long to figure out the ticket would be
soft plastics fished on the bottom in the deeper sections with current..The hot bait of the day was a watermelon seed zoom trick worm.
Watermelon seed is a excellent color choice when the water is super clear and we proved it on this day.
Between the two of us it was a 50 + fish day..Mostly dinks and 1 to 2 lbers but fun fun fun no matter how you look at it.
I had thought with the heat that we would be ready to call it a day around mid after noon but now way...We fished from sun up to
sun down..It was a blast...I even took along a ultra lite rod and some beetle spins and had a blast catching a few small bass and red breast.
There were red breast beds every where that we found a sandy bottom..

We caught a bunch around this size. 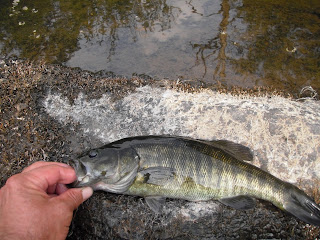 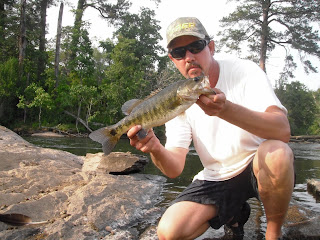 RatherBfishing caught the first big one of the day and what was really cool is he saw this fish and
kept casting to it until he coaxed the girl to pick up his worm..Way to stick with it there buddy and
a darn nice shoal bass...Congrats 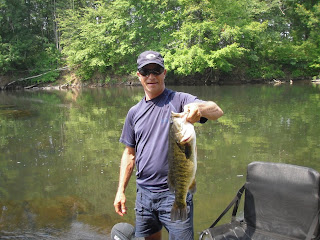 Now RBF is my buddy and I enjoy seeing him catch a big bass but no way could I let him get away
with catching the only big fish of the day...Well it took me the majority of the afternoon to do it but I finally
was able to hook into a good one myself. 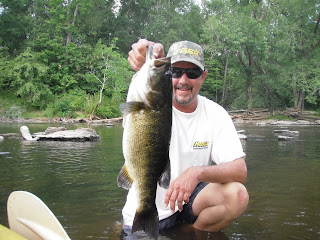 At the end of the day we were totally drained from the heat and the long day on the water but we had fun so all that just did not matter.
I would do it again in a heart beat..Summer fishing is always fun when it it comes to numbers of fish..I have had many a day
like this in the summer months when it seemed like you could almost catch one on every cast when you found the right spot.
It was fun but I am looking forward to the cooler days of fall when the big ones start fattening up for winter.

Fish on my river fishing friends..I'll see you on the river.
WJ