Despite the brutal summer heat that we are experiencing in Georgia I decide to get out for a day of fishing even though I knew not to expect much in the way of big fish or big number either. I guess I just needed to get my fishing fix anyway. You see after a week or two of no fishing I start to get river fever and even though I know deep down its probably a waste of time I just have to go wet a line anyway.

Well just as I suspected the fishing stunk to say the least.After about 4 or 5 hours I had only boated 3 or 4 bass and all of those would have weighed in ounces not pounds. That's a pretty sad day on the water right there. Finally later in the day I did manage to boat one that might have went 1 1/2 lbs tops.
My partner Glenn did manage to find one hole that had a few hungry fish in it and he was able to pull out two good ones. A large mouth that was around 3 lbs and nice shoal bass that weighed in a 4-4 he caught on a Sammie walking the dog on top. Here is a picture. 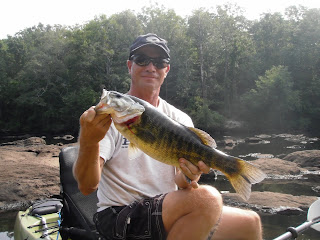 Then things got a little tricky. A storm started to roll in that was producing some lightning off in the distance so we decide to move back up stream toward our vehicles just in case things got nasty. Glenn and Sean had gotten ahead of me and I came to a set of shoals where I had to get out of my kayak and drag it up over some rocks and through a chute.As I was doing this I slipped on some rocks and reached down to grab the side of my kayak to catch myself. When I did this there just so happen to be a rod in the same place that I grabbed for that had a Devil horse top water bait that was full of treble hooks and as my luck goes two of those hooks impaled the top of my index finger on my left hand. One went in right above the big knuckle and the other between the big knuckle and the second knuckle before the finger tip. OUCH !!!!!!!!!!
Well there I was in a tricky situation once again. I have hooked my self many times on the river since I started kayak fishing but this time had me in bad position. My buddies were up stream from me where they could not hear me and there I was stuck in the middle of this chute on slick rocks in swift water holding on to my kayak and hooked to one the rods. I couldn't go forward and I couldn't go back. I was stuck and there was only one thing I could do. I had to remove the hooks right there in the river.
Luckily the first hook that was just above my big knuckle did not penetrate past the barb and I was able to remove it without much trouble but the second hook had went in past the barb and was not coming out easily. I was able to reach back into my kayak and get my pliers and pull out the first one but number two would not budge. I tried then to get around the hook shank and cut it off of the lure in hopes I could get to the bank and remove it there but the trebles were so small I could not get the cutters between my finger and the hook. And of course while trying to do all this the pain was excruciating.  At that point I realized I had no choice but to do what I feared the most and snatch it out.
I grabbed the shank of the hook with the pliers and gritted my teeth and gave it a hard yank and it was out.
Man that hurt like heck but it was out.Thank goodness but now I am bleeding like crazy but before I could perform first aid I had to finish pulling my kayak up over the rocks and get over to a dry spot where I could get to my first aid gear. All the while I am bleeding all over the place. Once I got to the bank I quickly got out my first aid kit and cleaned up the wound , applied some antibiotic ointment and wrapped it up and stopped the bleeding. It always pays to have a fully stocked first aid kit on board when you are on the river in a kayak full of fishing gear. You never know what might happen. I have been hooked no less than 8 times now in the last 6 years since I started kayak fishing and in all kinds of places.
I once even had two hooks past the barb at the same time in my thigh of all places.
After that excitement was over I continued to fish a few more hours with hardly any luck at all. It was so slow I finally got out my ultra lite rod and a beetle spin and fished for bream and red breast just so I could feel that tug on my line. I manged to catch a few of those which was fun. The bream and red breast in the rivers in Georgia are some of the most beautiful I have ever seen. 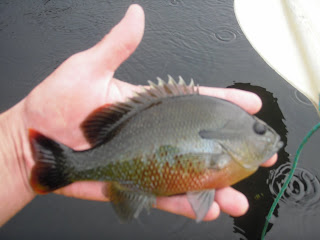 Well there you go folks. Be prepared for all situations especially when you are out fishing on a river in a kayak where the conditions can quickly change on you. This is a good example. There I was with a hook in my finger and a thunder storm quickly approaching stuck in the middle of the river. Thanks goodness the dam operator up stream didn't decide to release water from the dam. I would have been in a real pickle then huh ?

Until next time stay safe out there and be prepared. Fall is just around the corner and that is when the hunt for the World Record Shoal Bass will be back on my priority list once again.
My quest is not over. Its just been to dang hot to fish.
Take care.
WJ