First let me apologize for not making a post in such a long time but that's because it was been just way to hot to fish. The summer months in Georgia have been brutal this year. They reported on the news the other day that we had 45 days straight with heat over 90 degrees in the state. We have not had a summer this hot since back in the early 80's. In addition to that the lack of rain fall and near drought conditions have brought the rivers down so low that they are almost unfishable. I did make a couple of attempts to fish during the summer but did not have much luck.  It was so hot at times that I could only really stand to fish a half of a day or so and would be so drained from the heat that I would just have to pack it up and go home.

Well within the past couple of weeks it seems we have headed into the fall weather pattern and it came on quick. The temps have dropped by 20 degrees at night and about the same during the day. This past week I had taken a some time off of work that I needed to burn and managed to get in a couple of days on the river while I was off.. The fish are not in the full blown fall pattern yet where they are putting on the feed bag for the winter months but they were definitively noticing there is a change in the air.

I guess it does not take long for the fish to notice the water temps to start to drop even just a degree or two. On both of the days I fished last week the fish had moved up shallow and were hitting top water baits early in the mornings up until lunch time.. This is a good sign that the fall bite is coming. 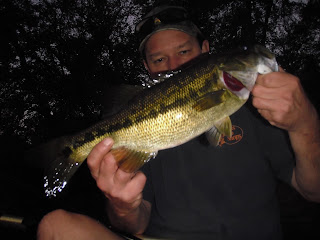 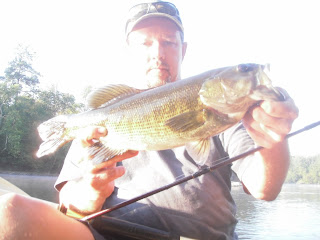 Now please excuse picture number one as it is a spotted bass and not what I am after but it was a formidable fish none the less and exciting to catch especially after the dry spell that I have had this summer so I added it in.

On Friday the 16th I had the opportunity to host a few fellas from Alabama that had planned a trip to Georgia to try their hand at shoal bass fishing. The weather had turned pretty sour on this day with a cold front moving through the day before but they had planned their trip already and I had the day off so what the heck.. We hit the river and made the best of the situation and it actually turned out to be a pretty good day.
It was 56 degrees when we put in and only reached a high of 72 and the wind was howling up to 20 MPH gust at times. That makes for a tough day of fishing.

Even though the conditions were tough for us the cooler air must have continued to bring the water temps down and spark the interest of the fish. The same pattern that I had experienced a few days before remained.. Top water bites on the buzz bait for breakfast and bumping the bottom with worms and craws for lunch seemed to be the ticket. At the end of the day I had boated 20 + fish which were a mixed bad of Spots Large mouths and shoal bass and the other three guys had done the same. Not to bad for a rough day as far as the weather goes. No big girls showed up on this day either but that's ok because it was a clear sign that the fall bite is just now beginning and the big girls will move up soon.

Here are a few pics of the better fish I caught on this day . 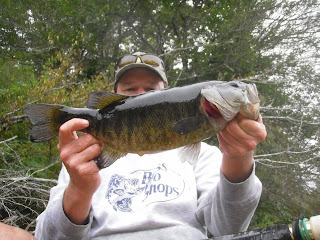 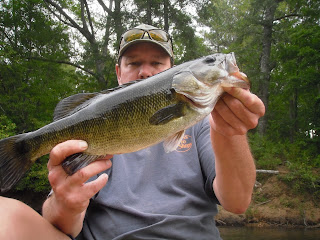 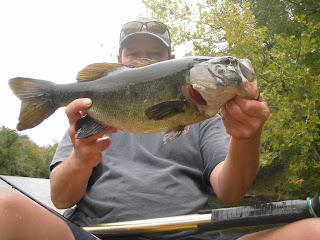 So the quest continues.The summer months were brutal but fall is finally in the air and I am totally excited to be back on the river chasing that fish of a life time. Fat girls we like to call them in the river fishing world. I have recently been been faced with some health related challenges but I will not let this deter me from my quest.In fact it has only made me want to accomplish my goal even more.
Stay safe out there folks and fish like you are fishing for that world record.You never know.
WJ